The test pieces, put in a flow-type photoreactor, are activated by UV illumination, and adsorb and oxidize gas-phase NO. Typical test conditions are given below:

This test has been designed for commercial products. The results below show the comparison of a standard NOx ISO test versus a Super Sensitive+ test on commercial self cleaning glass. The former shows little evidence of activity, however when run at a lower flowrate and higher surface area it’s NOx removal capability is evident and would have been missed under the standard NOx ISO conditions.
Details of ISO NOx Test 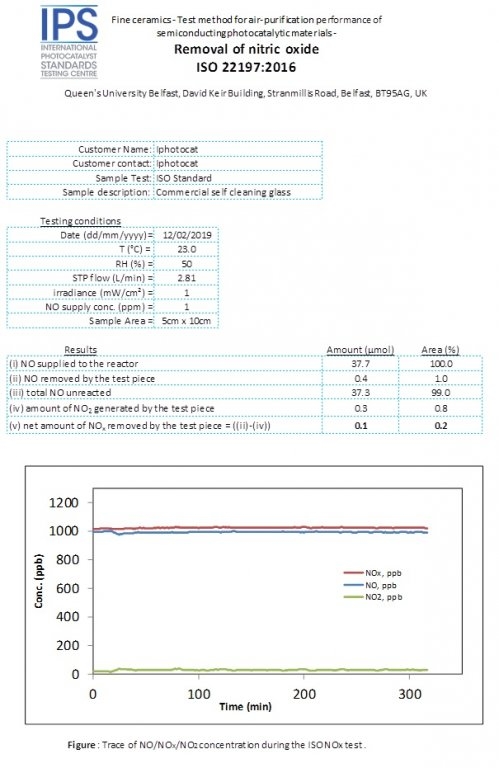 link to PDF of ISO standard – self cleaning glass 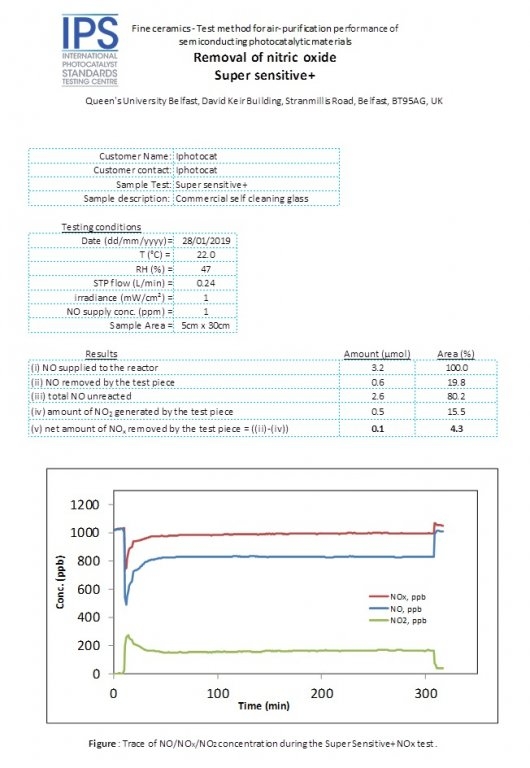 link to PDF of Super sensitive+ self cleaning glass

Nitric oxide is an important intermediate in the chemical industry and a major air pollutant produced by the combustion of substances in air, such as gasoline in automotives and fossil fuels in power stations.  In the absence of a catalyst NO is oxidised relatively slowly to nitric oxide by oxygen.  NO is used on a large scale in the manufacture of nitric acid, the bleaching of rayon, and as a stabiliser in the production of propene and methyl ether.  It is an important signalling molecule in most biological systems and, along with NO2, is associated with sick building syndrome and acid rain production.  Given its widespread commercial use and, maybe more importantly, its occurrence as a common air-borne, environmentally damaging pollutant, the removal of NO and its NOx counterpart, NO2, by semiconductor photocatalysis has resulted in the promotion of many commercial photocatalyst products, such as paint, tiles and paving stones, for their NOx removing ability.

The two key photocatalytic reactions whereby the titania-sensitised, photocatalytic oxidation of NO proceeds to nitric acid, via nitrous acid and a radical based mechanism [1-5] are:

Recent work [1] reveals that the accumulation of nitric acid on the surface promotes its photocatalysed reaction with NO that generates the toxic product NO2, i.e.

This can lead to an eventual steady state where the rate of NO removal is matched by the rate of NO2 production; which is clearly highly undesirable.  It follows that for any NOx-removing photocatalyst product to work effectively it is necessary that the HNO3 photogenerated, via reactions (1) and (2), must be removed at regular intervals, by rinsing with water, e.g. from rain or a damp cloth.

The standard sets out to measure the photocatalyst’s overall ability to remove the oxides of nitrogen, i.e. NOx, using a NO-containing air stream.  A measure of this ability is taken as the difference between the total NO removed (nNO) and NO2 generated (nNO2) during the irradiation period.  A typical data set generated, i.e. NO removed and NO2 generated, is illustrated below.  The hatched areas A and B are proportional to the amounts of NO adsorbed and photo-oxidised/removed, respectively.  Hatched area C is proportional to the amount of NO2 generated.  The key points are: 1 – start of contact with NO-containing feed, 2 – UV lights on and 3 – UV lights off and feed gas changed to zero calibration gas (i.e. air). 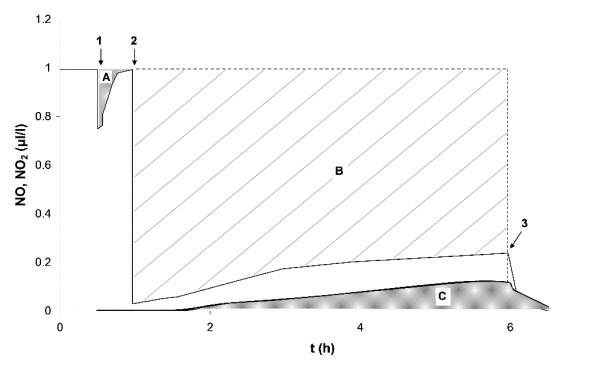 has been added to your basket.
Checkout